With tools for data capture and linking, data labeling, import/export of SHP files, polygon topology creation and analysis, and more, Carlson GIS is an awesome GIS “Swiss Army Knife” for the surveyor or engineer. See the Carlson GIS Improvement List tab below and be sure to check out our GIS Primer.

The Carlson line of software works on AutoCAD® and comes with IntelliCAD built in. Carlson GIS includes the ability to utilize higher resolution Google Earth images even over large areas with the use of auto-tiling. And, more map types are available besides aerial for roads, terrain, or hybrid. The GIS editor also supports the import and export of the Esri® geodatabase and provides a smoother workflow with Esri ArcGIS® services.

Also included are hundreds of enhancements to basic AutoCAD commands. Part of the Carlson Civil Suite, Carlson GIS runs atop of regular AutoCAD, AutoCAD Map, Land Desktop or Civil 3D, as well as legacy versions, plus on IntelliCAD. 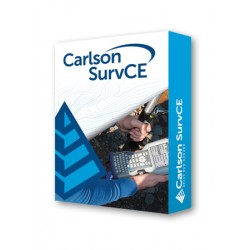